Like the institutions and the economy of Egypt, radical reform is needed root and branch, as well accountability and honesty. 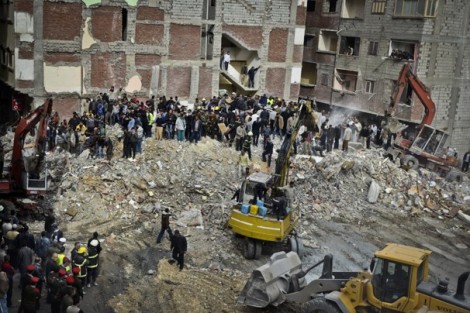 This week has not been a good one for Egypt, first the train crash in Badrasheen and today (16/1/2013) the building collapse in Alexandria. Poor construction methods are being blamed. The governor of Alexandria, Mohammed Abbas Atta, told Egypt’s official news agency that the building was constructed without a permit. But is this a symptom of something much deeper and much prevalent in Egyptian society. Every building collapse, train crash, boat sinkage, pothole opening, electrocution, factory explosion is followed by a wave of condemnation and religious fatalism, then people just carry on as if this is not their problem, its something that was beamed onto their screens and now they can and must move on. The problem isn’t the concrete, it isn’t the law, its the enforcement of the law and the sense that the law doesn’t apply to me. Laws exist that forbid buildings being constructed in certain areas of the city. But they are flouted. Laws do exist about the construction methodology. But they are flouted. The over reaching and nullifying prerogative which overrides these rules are ‘necessity’

‘But my son needs a new apartment for his new wife, I will build a new floor above this one, and besides the fine is tiny, who will care?’

‘When the government builds and provides cheap and decent accommodation, then we will consider moving…. We have no where else to build and go….’

‘I do what I want, this government can’t be trusted’

‘Rules?…. what rules?… they are just for the rich to oppress us… when I see other people following rules then I too will follow them…’

Logic and not emotion dictates that lives must be saved by building stable, weather resistant buildings and homes that wont collapse from seismic activity or wear and tear. But logic and emotion are in a constant battle in a state that sees the government a separate entity that is only there to provide something, and when its not providing its taking. Like any taxi driver in Cairo, they will curse and reprimand everyone else for their shoddy, even dangerous driving, but tell him that he ( most times its a he) is driving equally badly and you will be on a the receiving end of some unpleasant things.

The problem is the attitude not the people, not the concrete, not the government, but the way in which state and private institutions are viewed by the masses and handled. Like the shop owner happy sitting in front of his shop complaining about potholes in the road, whilst simultaneously grinning ear to ear that he has avoided paying any tax this year to the ‘government’ as if it were some alien entity. Successive governments in Egypt from the time of the Ottomans if not further back have always sought a top down approach, the population pyramid bottom heavy obliged, cajoled by fear of God(s), Pharaoh, Sultan or Dictator people have always done what has been expected of them. There was and still is a massive dichotomy in the quality of the finish and structure of people’s homes and their leaders residences and places of worship. This biased structural methodology creates a reluctant but obedient populace whose enthusiasm is siphoned off into the daily grind. A massive factory scale process of disenfranchisement and disownment, an attitude more akin to a rented apartment with no hope of the deposit ever being returned ‘شقة مفروشة ‘ as Egyptians famously like to joke. It is no wonder that an attitude of apathy and reluctance permeates into nearly every vestige of state and society. The structure is wrong. There is no sense of ownership, the Egyptian sense of fatalism which is annoyingly strong stops any real attack on the status quo and allows this grey cloud of ‘meh’ to hover overhead just out of sight but deeply affecting the psyche of the people. A lot can be said for Nasser’s centralisation of government, how even small descisions that effected local villages would have to go up the chain of command, ‘its out of my hands sir’ – ‘mish b’eydi ya fandem’ a common retort heard in state institutions up and down the Nile.

Ultimately when all else fails, optimism is left. As more and more Arabs become social media savvy and the time that news takes to travel drops exponentially with an equal drop in propaganda and spin, I hope that people will wake up and realise the state of slow motion crumble and decay around them and in their institutions. It isn’t someone else’s fault. Its our fault and we are part [if not nearly all] of the solution.